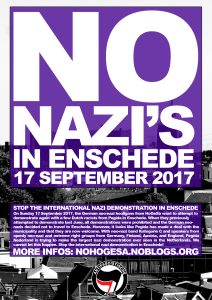 This Sunday Pegida racists and neo-Nazis from Germany will attempt to march in Enschede. It looks like this could be the biggest neo-Nazi demonstration in the Netherlands since the Second World War. Laat Ze Niet Lopen (Don’t Let Them March) and No HoGeSa are calling out for actions against the Nazi demonstration. Here you can find the latest update with all the relevant information, phone numbers and action maps.

The announced demonstration of No HoGeSa is not allowed to march; only a static manifestation has been approved by the city council in Volkspark from 14:00 to 16:30. Therefor the police are not allowed to deny you entry to the city. You are also allowed to move freely through the city as long as you are not demonstrating. Antifascists will gather on Stationsplein Enschede at 12:45 and then travel together to the location of the manifestation.

Do not be scared off by the police restrictions. You are allowed to move freely in the city and you cannot be denied entry to it. There is a legal demonstration where you have to be able to travel to. It should also be possible to go and have a look at the Nazi demonstration. Be creative and take action on or along the Nazi route.

Info structure – Infoline, Twitter and website
Laat Ze Niet Lopen will monitor the situation in Enschede during the entire day and provide info: locations of Nazis, arrests and police movements. We will keep you up to date through an info line, Twitter and through a timeline on www.laatzenietlopen.nl. The info line can be reached on +31 (0)6 87 99 18 33. If you happen to have important information this Sunday you can message/call it in to the info line. You can also call if you need information. We will also post regular updates about the developing situation on Twitter. If you also use Twitter you can use the hashtag #LZNL in your messages on Sunday.

Action maps
There is an action map of the surroundings available. The map has a grid, us it to specify a location when you communicate with the info line or post an update on Twitter. Any events on the day of the protest will be mentioned with a grid number. Click on the action map below to enlarge it and download it, so you can print it or save it on your phone. 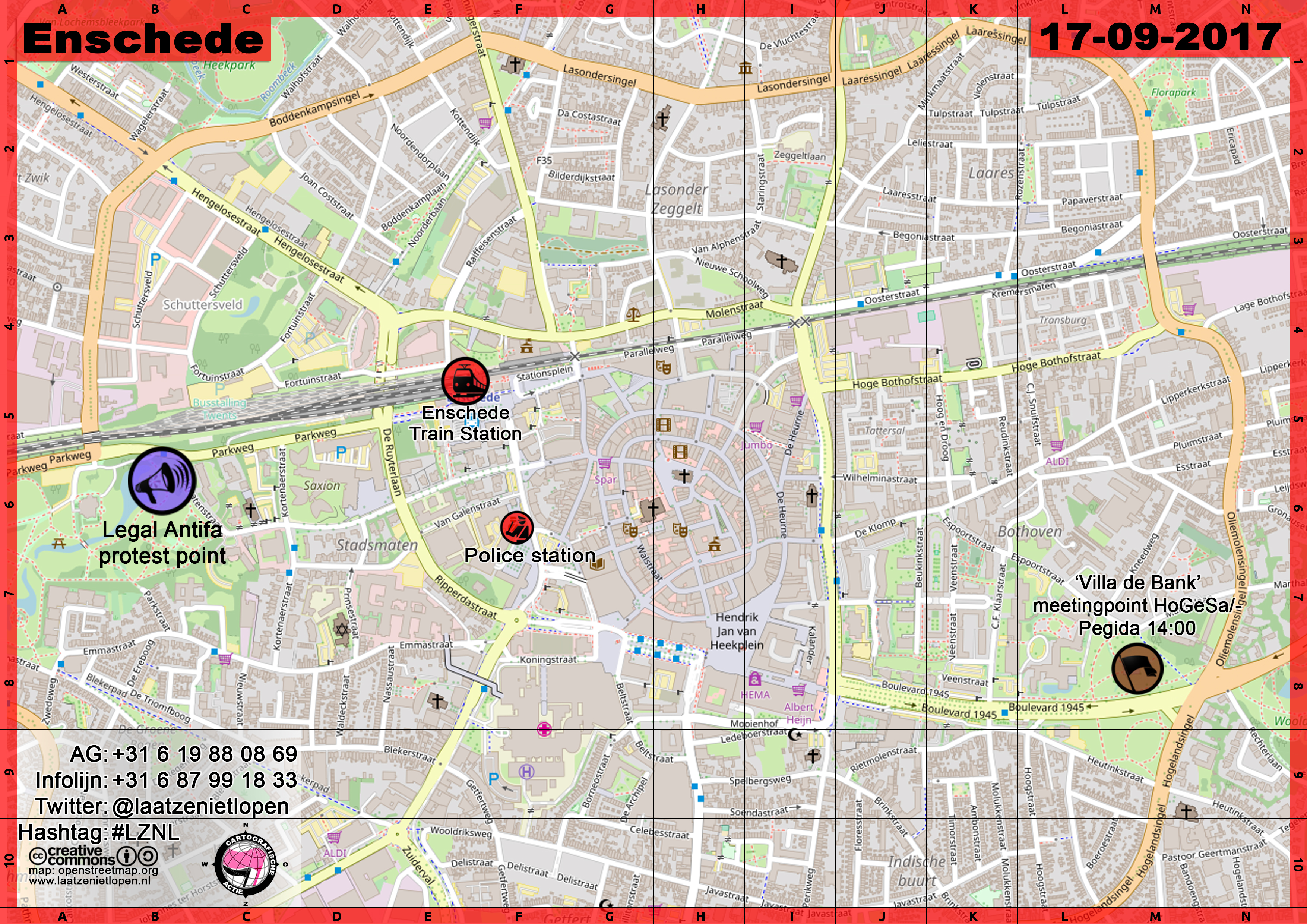 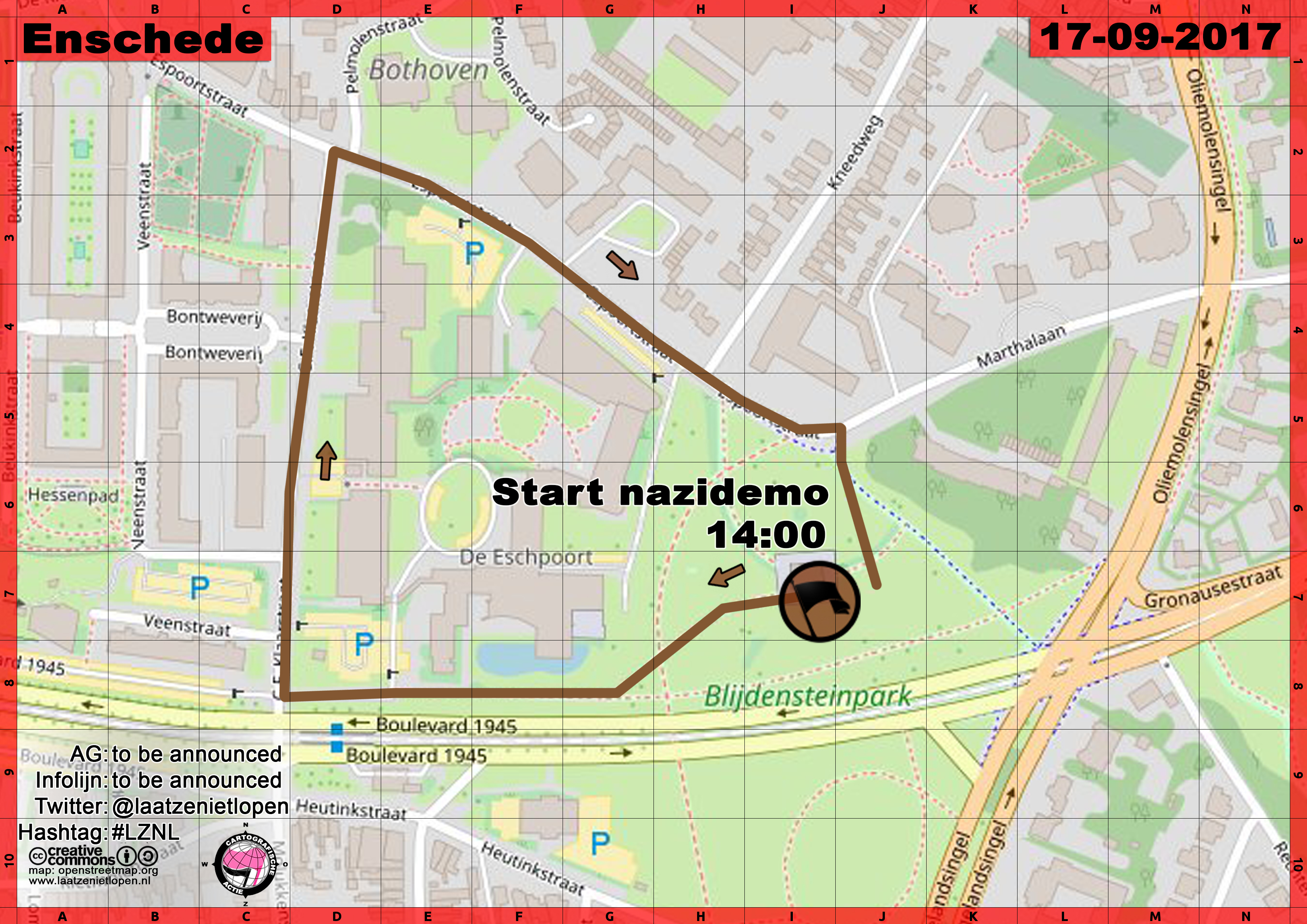 Arrestee group and lawyer
At a protest it is possible that people are arrested. Therefor there will be an Arrestee Group (AG) and a lawyer available to provide legal aid in case people get arrested. The AG is available on the number +31 (0)6 19 88 08 69

The lawyer on Sunday will be Willem Jebbink. If you see someone being arrested call the AG, don’t mention any names but give a clear description of the person and the location of the arrest. If you happen to be arrested, don’t declare anything to the police. You have the right to remain silent, use this right! Don’t sign anything, especially fines. Everything you say about yourself or others can be used against you or others. If you happen to be kept for more than 6 hours and want to speak to a lawyer then ask for Willem Jebbink. When you are released contact the AG immediately to inform them that you are free. They can then give you further advice. You can find more information about the AG here.

Come to Enschede the 17th of September and take action! Stop the international Nazi demonstration, Don’t Let Them March!